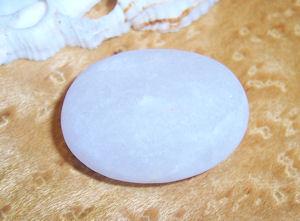 An egg rock. Cool and white, worn smooth by the Pacific Ocean. It’s the prize on a beach filled with rocks in shades of black, gray, red, and brown.

I like the black ones, too: a little rough (not much — just enough tooth to be felt with my thumb as it skims the surface), oval shaped on the perimeter and mostly flat.

Rock picking at Moonlight Beach in Encinitas, CA is one of the little traditions I’ve shared with my daughter since she could walk. Nearly every year since she was born, we have spent time with family who live on the other side of the country from us. A centerpiece of those visits has been at least one visit to “the rock beach,” where we spend hours walking the shoreline in search of our favorite stones. We mostly like them smooth and kind of egg shaped, about 1″ to 1-1/2″ long. They have to have the right tactile and visual appeal.

White ones are the most difficult to find, so they are the ones we actively seek. But sometimes there will be a round rock with salt and pepper markings that sparkles in the sun. Or a dark red one that resembles a kidney bean. Once, my daughter presented me with a small, dun-colored rock that was shaped like a heart.

We each have a bucket, and we add rocks that attract us. Sometimes, we cull the pile, but mostly we just add. Sorting is its own ritual and that happens after we leave the beach — sandy and windblown and joyful.

We take our haul back to grandma’s house and spill our buckets into (separate) piles, squatting on the pavement. First, we run the hose over them to get the sand off. Then we get down to business. Each of us sorts her pile according to personal criteria. One pile is “keep for sure.” A second pile is for the ones we’ve decided we don’t want after all. The middle pile is the undecideds. That’s where all the action is.

Once sorted, we do “show and tell” of our favorites, and then we examine eachother’s pile. At this point, trading begins. If either of us like something in the other person’s mound, it is put to one side. If it’s an especial favorite of the “owner,” it is off limits and no whining. Often, these chosen ones will become gifts — presented to each other freely, with no haggling. We do haggle, though, because that’s part of the fun and the ritual. Haggling is what the middle pile is for.

We spend a long time doing the trading. Trading not only helps us fill gaps in our own piles, it is also a tribute to the finding skill of the other person. Not to want any of their selections would be highly insulting. Fortunately, that has never happened to us. Our trading sessions are always satisfying.

The discard pile is freely available for the taking — but most of those end up in grandma’s garden.