Since its establishment in 1980, Rebecca Press has issued more than 40 miniature books. Here are some of those produced prior to 2016—presented in no particular order. A complete chronological list can be found here. 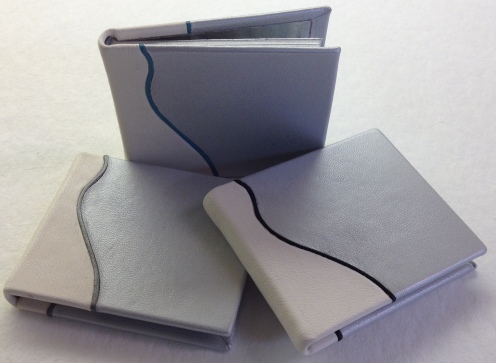 Regular edition of Venus Explor’d, which presents a photographic study of the female form. 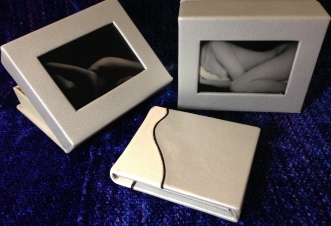 Venus Explor’d is the first miniature book published by Rebecca Press. A photographic study of the female form, it presents the work of award-winning documentary filmmaker and photographer Noel M. Izon. The regular edition is bound in silver-gray book cloth with foil stamping on the cover. A deluxe edition was always intended but it took the end of the run for it to finally happen. Released in 2017 in a limited edition of 15 copies, each slightly different from the others, the deluxe edition is bound in full leather and features a female torso that wraps around the spine. The box for the deluxe edition frames a pair of interchangeable prints from the book and opens to form a display stand. Available to order. Please email: serous39202@mypacks.net

The New House, by David Mamet.

The New House is a first-edition poem by Pulitzer Prize-winning playwright David Mamet. This miniature book from Rebecca Press features original wood engraved illustrations, by Sarah Chamberlain. The book is printed letterpress in 2 colors, with wood engravings printed from the blocks. The title page is blind embossed. Bound in wooden boards with leather spine, the cover has a laser-cut “fanlight” and a miniature brass doorknob with escutcheon. A tiny brass key dangles at the end of the bound-in bookmark. Endpapers carry the reader from the front door into the interior of the house.

Regular edition, cover of The Goldfish.

This pair of delightful stories by children’s author Eleanor Farjeon is published in a miniature edition by Rebecca Press and features full-color illustrations by Edith Bingham. The stories are presented in a back-to-back format, with each story having its own cover of handmade paper and a full-color illustration. The spine is leather. A deluxe version of the book was produced, bound in full leather, with color illustrations under domed watch glass. On the “Princess” side, the glass becomes a window into the castle; on the “Goldfish” side, the glass is a fishbowl. When viewed from the side, the effect is of an orb going through the center of the book. Artist proof copies of the deluxe edition featured a double foredge painting.

Erte Maquettes, regular and original deluxe editions plus a few images from the book.

Erté Maquettes presents previously-unpublished work by the iconic Art Deco artist. The illustrations shown in this miniature book are, themselves, miniature works. When Erté designed covers for Harper’s Bazar magazine in the 1930s, he would submit 3 or 4 designs in small format (maquettes) for consideration. One would be selected to become a cover; the other diminutive gems were stored away for some 40  years, until they appeared in this book. Presented in this volume are 44 full-color maquettes (42 of which are previously unpublished), along with a short introductory essay. The regular edition is bound in black silk with a silver leather spine strip and printed endpapers. The original deluxe edition was bound in cobalt blue snakeskin inset with black calf, seed pearls, and a diamond. It was housed in a custom designed minaudière made of the snake and calf skins framed in sterling silver. A new, limited deluxe binding is was designed in 2018 and is available for special order. Please email for details: serous39202@mypacks.net

The Legend of Sleepy Hollow 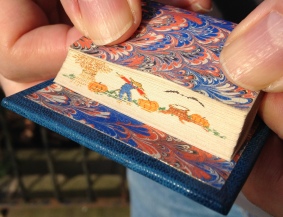 Washington Irving’s classic Halloween tale of Ichabod Crane and the Headless Horseman is presented in its entirety in this miniature volume. Illustrated with wood engravings by Sarah Chamberlain, the story is letterpress printed, with pictures printed from the blocks. Endpapers were specially marbled by Chris Weimann in a miniature peacock pattern. The Sleepy Hollow U.S. postage stamp, which served as inspiration for the design of this book, is tipped in as a frontispiece. Deluxe copies were bound in deep blue leather with orange leather inlay and black stamping. Special deluxe copies had foredge paintings by illustrator Sarah Chamberlain.

Wood engraving by Alan James Robinson for The Nightingale and the Rose. 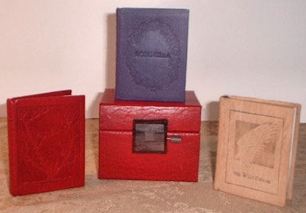 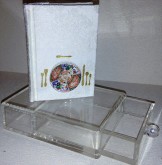 Conclave Cookbook in its acrylic case.

Nonsense Botany, front and back views.

Some Other Rebecca Press Titles

Quo’pourri. Letterpress printed in 2 colors, a collection of favorite quotes.

E-I-E-I-O. Soft-cover version presented as a Conclave keepsake; a few bound in cloth over boards. 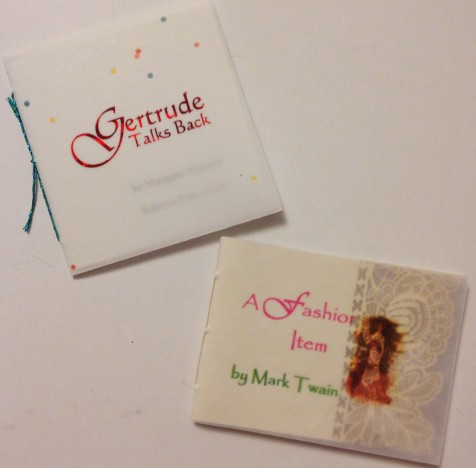 Two favorite bits of literature: Gertrude Talks Back and A Fashion Item. 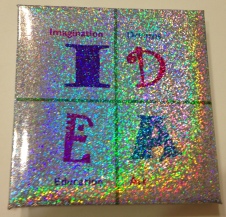 Only a handful of these were produced. A star book with quotes on the topics of Imagination, Dreams, Education, and Art.

Gemological Pharmacopoeia. Curative uses of gems during the Middle Ages.

Goose Eggs and Other Fowl Sayings. Phrases, quotes, and terms based on winged critters.

Alphabet Salmagundi. Ornate letters from a variety of decorative alphabets.