I love books and I’m very attracted to tiny objects, which made it almost inevitable that I would become a collector of miniature books.

As to other types of categorization, subjects and collection focuses for miniature books are as varied as they would be for any other type of library. Some people collect only fairy tales, or modern authors, or Shakespeare. Some concentrate on bibles (usually termed “Thumb” Bibles) or almanacs. There are collectors who only gather antique volumes, while others prefer more recent publications. Quite a few people focus on special or unusual bindings. I’ve seen miniature books bound into wine corks and walnut shells; books covered in embossed sterling silver and mother of pearl; books shaped like frogs or pieces of fruit; books in the form of circles or hearts.

So what do I collect? I concentrate on a few different areas. I like fiction, especially fairy tales. I like beautiful bindings. I’m not that interested in novelty bindings, though (wine corks and nutshells, for example); I’m intrigued to see them but I tend not to acquire them. My primary criterion is that the book be readable. For this reason, I tend to prefer books in the 2 – 3 inch range. I like illustrations and prefer original illustrations to reproductions. I’m not a big fan of miniature books that simply take a larger book and shrink it down (not that I don’t own any, because sometimes the subject is more important to me). I do own some dollhouse-size miniature books. They were my first introduction to miniature books and there is still fascination in the idea that such a tiny volume can contain so much actual text. But my true collecting instinct was not engaged until I discovered the larger size. These bigger volumes are very akin to the traveling libraries that were prevalent in earlier times, when travel took weeks and months and one of the few avenues of entertainment en route was to read. Since space was limited, the books had to be small. Now, of course, we have e-readers and can carry thousands of books in our palms. Minus the charm. And the romance.

I think part of the intrigue of miniature books is that the small format allows presentation of short material that would get lost in a larger volume. For example, I produced a book containing a poem by David Mamet. In a large book, the poem wouldn’t take up half a page. In the miniature volume, each phrase occupies a page and can be savored. Another advantage of such a small format is that materials can be used that would be prohibitively expensive — or just too delicate — for a full-sized volume. Handmade papers, silks, fine leathers, even jewels or precious metals can be incorporated into this diminutive form. To bind a full-size volume in leather, for example, might require up to an entire skin for a single volume. A complete edition of miniature books would likely use no more than one hide. Instead of yards of silk, the job can be done for half a yard. For a designer, this is a huge advantage.

A miniature book is generally defined as having a maximum measurement of 3 inches in its largest dimension, although some collectors include books up to 4 inches (known as macrominiatures. No minimum dimension is defined and over the years competition has existed to produce the smallest miniature book, with many candidates being so tiny they would get lost in a crack if dropped! Some are so small they can’t be seen without a magnifying glass.

This photo shows the more generally accepted size range, arranged on a standard-size paperback book for scale. The red book on the left is 3 inches high; the small blue book on the right is about an inch. Some of the books in the shot glass are between 5/8″ and 3/4″. Books under an inch are categorized as microminiatures or dollhouse size.

Here are three examples of miniature books whose bindings make them as much art objects as books. Each book is completely readable and — when removed from its elaborate casing — adheres to a traditional book structure (pages and covers). From left:

Masks (Poole Press), explores mask designs from various cultures. The book slides into the bottom “stairstep” of the box. The box itself is a shadowbox that contains a specially designed, fully dimensional mask. Pequeño Press is the publisher of Sleep Achiever, the bed design in the center. The book’s cover is padded and stitched to resemble a bed with pillows and coverlet. The book slips into a handmade, antiqued brass bed frame complete with railings and bed-knobs. Finally, Bo Press’ The Masked Ball, a collaboration with author Prue Batten, who wrote the original story. The book and box are bound in pink-and-white striped paper accented with black lace. The shadowbox that houses the book showcases a golden mask complete with tiny feathers and a handle.

A Short History of Miniature Books

Another early printer of small books was Greek and Latin scholar Aldus Manutius; in the the late 15th century his Aldine Press in Venice was well known for miniature reproductions of early classical writings.

Miniature books were very popular in England and France during the 17th and 18th centuries; ladies and gentlemen of the period carried in their pockets not only prayer books and bibles but also books of poems and almanacs. Almanacs, many illustrated with beautiful engravings, were in especially high demand. These tiny books (including dictionaries, almanacs, and the works of Shakespeare) often were bound with expensive leathers, mother of pearl, tortoiseshell, bone, silver, and even gold.

Miniature books have long been associated with the famous, including:

Collecting miniature books is popular in many parts of the world, including Latin America, France, Italy, Eastern Europe, Holland, Russia, and Japan (where they are called mame-hon or “bean-sized books”).

A Sampling of Miniature Books

Within the basic miniature book framework, many design approaches and formats are possible. This grouping features several:

A Variety of Subjects

Here’s another small group of miniature books from my shelves. Minding the Store is a faithful miniature reproduction of the full-size book by Neiman-Marcus  mogul Stanley Marcus. Mr. Marcus was an avid collector of miniature books. He is quoted as saying that his collecting was getting out of hand and his wife kind of put her foot down about adding any more things. But miniature books, were small enough to be smuggled home in a coat pocket! Eventually, Marcus started his own miniature publishing venture, Somesuch Press, and went on to publish quite a few miniature books.

Other books in this photo: Next to Minding the Store is the text of a 1921 essay on the history of the alphabet. It is decorated with printer’s ornaments arranged in various configurations. The cover of the book is cloth that has been printed with a pattern of printers’ ornaments. In purple is The Cask of Amontillado, Poe’s classic story, as published by Bromer Booksellers — one of the best-known bookstores and proponents of miniature books in the world. In front is a 3-volume set of books, focusing on shoes, hats, and bags. Each book is an alphabet, featuring terminology related to the subject matter. Each book is bound in a different marbled paper. Delightfully illustrated.

Two Approaches to One Subject 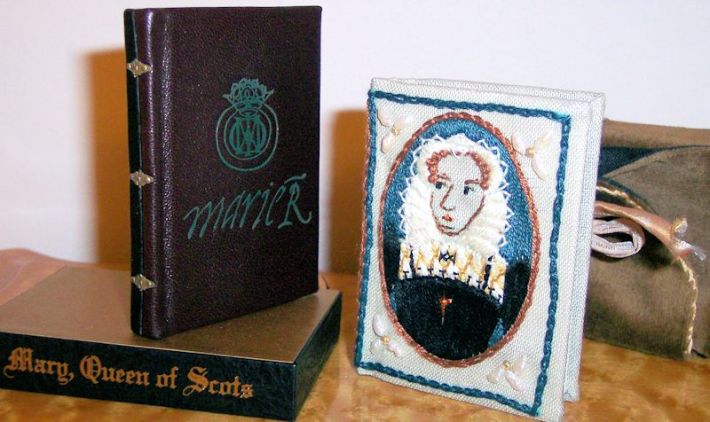 On the left is the book published by Ash Ranch Press and authored by Laurence Hines. It is a two-part, back-to-back, fictional treatment of Mary Stuart and her Executioner on the solemn day of the Eighth of February, 1587. Its two covers are covered in maroon and black calf (respectively, Mary and Executioner), visually linked at the spine by a pair of tiny hinges.

The book on the right was designed and produced by Poole Press. It focuses on a very different aspect of Mary’s life — her passion for embroidery and needlework. The inside text describes and discusses this work. The cover is hand embroidered and then wrapped in a special fabric case.

Erte Maquettes is one of the miniature books I designed and produced under my Rebecca Press imprint. Erte was a fashion illustrator and theatrical costume designer whose fabulous designs appeared on nearly every issue of Harper’s Bazar magazine in the mid-1930s [note: the magazine now spells it “Bazaar” but when Erte worked for them it was “Bazar”]. Being a great fan of his work, I hoped to produce a miniature book that featured it. While on a trip to England I worked up the nerve to approach his agents; they graciously gave me permission to make my book. Furthermore, they offered me something unexpected and very exciting: material that had not been published before.

Some background: When Erté was designing covers for Harper’s Bazar his practice was to create 4 or 5 different designs for consideration. These “maquettes” were done in a small scale, perhaps 5 inches high. Once a design was selected, it was rendered in full size and in full detail. So of every 5 designs, only one would actually be published. Erté kept all of the maquettes and it was these tiny pieces of art that were offered to me for my book. Eventually, I selected 44 illustrations to be produced in full color. I designed two bindings for the book. The regular edition was bound in black silk with silver leather on the spine. The more opulent deluxe edition was bound in cobalt blue snakeskin inlaid with black calf, seed pearls, and a diamond. It was housed in a special box made of sterling silver, black and silver calf, and the cobalt snakeskin, with a black tassel. Erté agreed to sign the deluxe copies.

A highlight of this experience was the opportunity to meet Erté and to present him with a deluxe copy of the book. When I met him at his birthday party the previous evening he was wearing a tuxedo with snakeskin lapels (!) and when I gave him the book he told me that cobalt was one of his favorite colors. I’d figured it might be because he often used that particular color in his illustrations, so it was gratifying to know that I’d been right.

The composite picture above shows both bindings of the book and a few of the illustrations from it.

A Closer Look at a Few Rebecca Press Titles

This miniature cookbook, co-published with Poole Press, was produced in two different bindings. The “informal” one features red and white checked cloth with a paper “plate” label and stamped silver place setting. The “formal” version is bound in white damask with a gold-stamped place setting and a miniature china plate set on the cover. The recipes featured represent each of the first 10 cities in which the Miniature Book Society held its annual meetings.

Two Eleanor Farjeon stories are contained in this book: The Seventh Princess and The Goldfish. The stories are presented in an upside-down format, back to back, so that each story has its own front cover. To go from one to the other, the book is flipped on its vertical axis. Essentially, the book has 2 front covers. 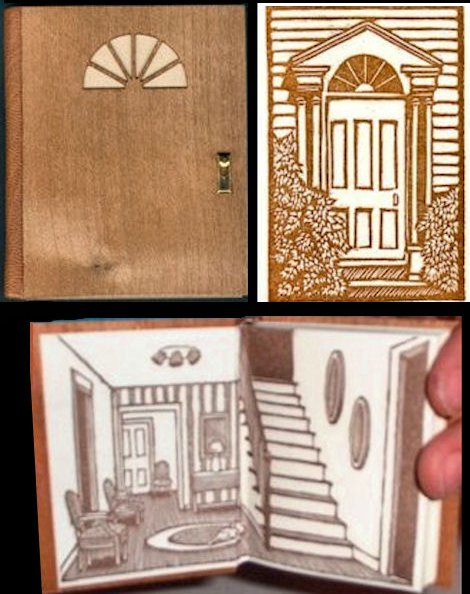 Pulitzer Prize-winning playwright David Mamet penned the first edition poem The New House that is the text of this book. The book features a wooden cover done to resemble a front door, complete with cut-out fanlight and a real brass doorknob with keyhole escutcheon. The door “opens” to reveal an interior room scene on the endpapers. The book contains original wood engravings. A bound-in bookmark has a tiny brass key on the end.

The full text of Washington Irving’s Legend of Sleepy Hollow is presented in this book that features original illustrations and a genuine Sleepy Hollow postage stamp as frontispiece. The stamped and inlaid leather cover design replicates the stamp design. A matching slipcase has a curved orange edge to evoke a sliver of moon.