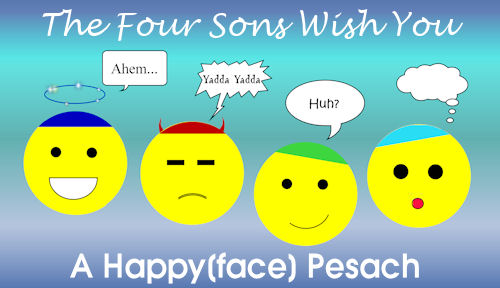 Open the Haggadah, do what it says. Simple. Easy. The path is clear to see. Just follow it.

Wait. Why do we drink once and then stop? What’s with all the raising the glass and putting it down? It’s confusing.

Four questions aren’t going to be sufficient. No dayenu.

On this night we are supposed to drink 4 cups of wine. So why the heck won’t they let us drink them?

And the hand washing. Wash the hands. But don’t say a prayer. And don’t let the women wash their hands — only the men. Are men inherently dirtier? Hmm… Difficult to know whether the quest for equality needs to embrace the equal dirt doctrine.

Wash the hands again. But wait. THIS TIME, say the prayer. What’s the deal? Were we too dirty to say prayers before?

Never mind. It’s time for the plagues — everyone’s favorite part. How many? Ten, right? Weeell… depends. Some people say each nuance of the plague counts as a separate instance. Could be 10. Could be 50. Could be 250. I think it’s all those angels dancing on the head of the pin. They keep making more plagues when we’re not looking.

Anyway, I vote we stick with 10 plagues; it will take too long to name 250. We might starve to death before the list is done, and that would be a plague on us. Even in the desert, the Children of Israel didn’t starve. They had manna. And speaking of manna, was it leavened or unleavened?

Actually, Pesach is a lot about the math.

Everybody read this next part together.

Wait. I have a different Haggadah than you do. So what page are we on?

Mine doesn’t say the same thing.

Quit arguing. Everybody just read whatever you have. Maybe it will make sense to God.

Why is this night different from all other nights? Well, in this instance, it isn’t. We’re never all on the same page.